Within the international framework of the 120th anniversary celebrations of the birth of Jorge Luis Borges, the Spanish Club “Siglo XXI” will present a bilingual round table entitled “Borges, the first 120 years.”

Jorge Luis Borges was born in Buenos Aires, Argentina, in 1899 and passed in Geneva, Switzerland, in 1986. He is one of the most important writers in all over the world’s Republic of letters of the 20th Century. His work has influenced many writers, poets and thinkers beyond those of the Hispanic world.

This event is also part of two other celebrations in our academic community. The Spanish Club “Siglo XXI” celebrates 20 years of creation and uninterrupted cultural activity in TAMIU. Our University is celebrating its 50 years of creation and permanent contribution to professional education in this region, as well as in Texas and the United States.

This is an event open to the public. For more information, contact Dr. José Cardona-López at
956-326-2690 or cardona@tamiu.edu.

Universal Basic Income Panel hosted by the College of Arts and Sciences, the Humanities Department, and the Philosophy Society student organization on Friday, November 9, 2018

The course is a senior seminar, which Associate Professor Paul Niemeyer has built around the theme of how universities have been presented in fiction and drama.  The first thing the students read was Smiley’s comical 1995 novel, Moo, set at a fictional Midwestern university where the values of a land-grant college are challenged by modern American cultural and political realities.

Prof. Niemeyer, who knows Ms. Smiley through Facebook, invited her to speak to the class through Google Hangouts.  In a 45-minute session, she answered student questions about the novel and about her writing process, and she spoke at length about universities and students’ roles in them.  Many students noted Smiley’s view that the university is really only a place, but it’s a place students must strive to improve and make better for future generations.  “The academic world isn’t an ivory tower,” Smiley said.  “It’s a slippery slope.”

Students reported that they took from Smiley’s visit encouraging messages that the university is a place to grow and to find out how the world works, and that all students should “be happy and do the best they can.”  One student said, “Ms. Smiley was genuinely funny and seemed humble about her work.”

The seminar Escrituras plurales: teoría y praxis de la novela corta [Plural Writings: Theory and Praxis of the Short Novel] - 2018, devoted to the study of Spanish American short novels or nouvelles, held its VII, VIII, and IX sessions during this Spring. It will be in Spanish and draw both scholars and students from Séminaire Amérique Latine (Sorbonne Université), Centro de Estudios Literarios (Universidad Nacional Autónoma de México, UNAM), and Department of Humanities (Texas A&M International University). This seminar will be delivered virtually through a videoconference system.

#metoo: Sexual Misconduct in the Media & Our Lives 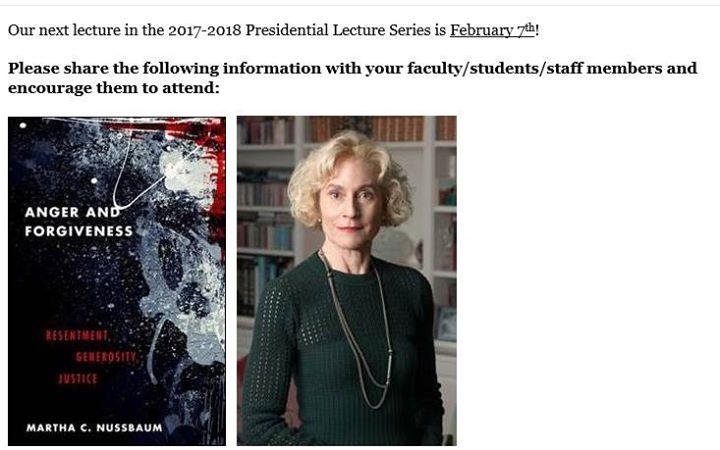 Marginalia is a Latin term that in its origins referred to the inscriptions that monks and other amanuensis made on the empty space surrounding the body of text inscribed on a parchment. Romance languages are, to a great extent, the product of marginal inscriptions on Latin manuscripts. Thus, the first manifestations of the Spanish language are to be found in the glosses that monks scribbled on the margins of Latin manuscripts to clarify and comment on words whose meaning was already obscure for the medieval reader, and those annotations were made in the new romance language, which was nothing but macaronic Latin. By extension, marginalia refers to those writings that do not belong in the canonical body of works of a culture or civilization, and is close in meaning to apocryphal. Furthermore, it can be understood as referring to the interstices existing between two or more cultures, nations, or religions. In our usage of the term, marginalia refers to those areas of the world that are populated by displaced or uprooted individuals, limbic spaces in which mere survival can be considered an illegal activity.
Due to its geographical location on the banks of the Río Grande/Bravo—being the busiest inland port in the Americas--and its unique history—including being the capital of the short-lived Republic of the Río Grande—Laredo certainly offers an exceptional site for an academic conversation on borders and frontiers. Such is the reason why IASA has chosen to celebrate its first congress in the United States.

As in our previous world congresses, this call for papers does not exclude any topic in our field of inquiry, and all proposals are welcome even if they do not relate directly to the theme of the conference. Hence, possible topics include but are not limited to:

Paper presentations will be submitted in any of the four official languages of IASA and of the conference: English, French, Portuguese, and Spanish.

and the TAMIU Philosophy Society hosted:

The members will be showcasing writings from various authors that support victims of sexual assault. Aimed at inspiring by these testimonials, and free to write your own words of solidarity and encouragement. From 12:00 noon to 5:00 p.m. in the Student Center Rotunda.

devoted to the study of Spanish American short novels or nouvelles will held its IV, V, and VI sessions during this Spring/Summer of 2017. It will be in Spanish and draw both scholars and students from Séminaire Amérique Latine (Paris-Sorbonne University),  Centro de Estudios Literarios (Universidad Nacional Autónoma de México, UNAM), and Department of Humanities (Texas A&M International University). This seminar will be delivered virtually through a videoconference system, starting this Friday, March 31 at Western Hemispheric Trade Center, room 224, at 10:00 a.m. - 12:00 p.m. (Ciudad de México, Laredo)/ 5:00 - 7:00 p.m. (Paris).

Dr. Mark Menaldo "Authenticity and the Art of Deception in Niccolo Machiavelli's The Prince" (February 10, 2017) Abstract: In the 1970s and 80s, writers and thinkers from different but related fields became interested in how gender is represented in visual culture, whether in art or in the media. With the 1970s feminist and gay rights movements, increasingly larger groups of writers and thinkers began investigating notions of representation and identity. Art historian John Berger and film theorist Laura Mulvey wrote influential works in which they described one of the pervasive modes of representation of women in the Western world: whether in art or on screen, women seem to be on display and objectified for a viewing subject that is implicitly male, implicitly consuming the woman on display. The notion of the “male gaze” became a central term in film studies that other theorists engaged and deployed in their analyses, but also that they questioned. One of the biggest challenges to Mulvey’s work, specifically, was the work of queer theorists, who began exploring the gaze of gay men and lesbians. These viewer, they argued, would not “consume” women on screen in the same manner as straight men, and that Mulvey’s notion of straight women who must identify with the objectified actress on the screen would not hold easily for other populations. This lecture will explore Berger and Mulvey’s influential ideas, as well as some exciting queer interventions into the realm of aesthetics, the male gaze, and representation, including gay male reclamations of Hollywood divas; the lesbian gaze; and camp aesthetics.

Dr. Manuel Broncano "Ekphrasis and Mimesis: The Boundaries Between Literature and the Arts"

Abstract: My presentation will briefly approach the theory and practice of ekphrasis in the history of literature against the background of the ongoing philosophical discussion about mimesis, from the Greeks to the Romantics. The concept of ekphrasis refers, in its most basic definition, to a literary text that speaks to or of an artistic object, and thus refers to a transgression of the boundaries between various forms of art. For Plato, this mode of expression would represent a farther removal from the ideal and would therefore be an even worse kind of lie than that of the artistic object itself. As Peter Barry observes, “The Greek roots ek and phrasis in combination simply mean 'speaking out' or 'out-speaking', which can also bear the connotation that what the poem speaks of lies unambiguously 'outside' the poem, rather than within the poet's imagination, even though it is not in the 'real' world, but in the parallel universe of art” (Barry 155). In this respect, ekphrastic literature can be considered as a quintessential Postmodernist mode, since its referents are not to be found in “reality” but in art itself. For the Romantics and their anti-mimetic conception of artistic creation, ekphrasis becomes a favored mode as a valuable tool in their search for the totality of the sublime. In the last part of my presentation, I will analyze in some detail ekphrasis in Melville’s Moby Dick and its role in turning the novel into a treatise on the interconnectedness of literature and the arts.